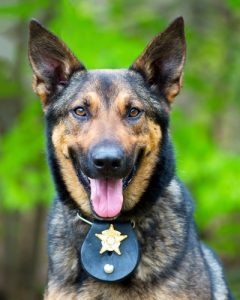 Just as we lose too many officers in completely avoidable single-vehicle crashes, the sad truth is that police dogs die in hot cars all too frequently. The Officer Down Memorial page reports at least 64 police K-9s have died on U.S. soil from heat exhaustion between January 2011 and August 2015. According to the Connecticut Police Work Dog Association, another 12 police K-9s have died from heat exhaustion between January and July of 2016.

In August of 2016 a beloved K-9 named Blitz, who worked for the Montgomery County Illinois Sheriff’s Office, died in a hot squad car after it appeared that the air conditioning “malfunctioned” and the heat alarm system “failed to go off.”

Mechanical malfunction of the vehicle and its systems, and handlers who simply forgot that they had left their dogs in their assigned vehicle, account for many K-9 deaths. These deaths are often reported as heat exhaustion.

Take measures to ensure the safety of your K-9. The tragic death of a police K-9, whether killed in the line of duty, by unintentional neglect of the handler or due to vehicle malfunction, can have a profound effect on not only the handler, but the agency.

Take measures to ensure the safety of your K-9.

Remember – WIN: What’s Important Now? The overall safety of the K-9 is important. Check your vehicle each time you turn it off to ensure your K-9 is not being left inside.

Please contact FSRMF with any questions or for additional information at loss.control@fsrmf.org.