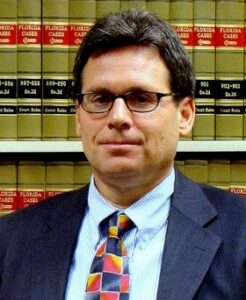 The Florida Sheriffs Risk Management Fund is proud to announce the addition of Patrick T. Kinni to our team of experts. Patrick joined FSRMF team as a claims attorney in June. He previously served as general counsel to the Blueprint Inter-government Agency, a special district focusing on both infrastructure improvements and economic development in Tallahassee. Prior to his work with Blueprint, he served as deputy county attorney for Leon County, where he practiced for over 20 years.

Patrick began his career as a municipal prosecutor for the City of Fort Lauderdale, where he worked from 1990 to 1996. He earned his Bachelor of Science in political science from Jacksonville University and his Juris Doctor degree from Nova Southeastern University College of Law. Patrick has been an adjunct professor at the Florida State University College of Law since 2007, teaching a course on civil pretrial practice and coaching the Florida State Law Mock Trial Team since 2014.

He was actively involved in the Florida Association of County Attorneys, and has served as the chairman of the Public Safety Committee and vice chairman of the Amicus Curiae Committee for several years, being recognized with numerous awards. In addition, he has been published in The Florida Bar Journal. FSRMF is grateful to have Patrick on our talented team!