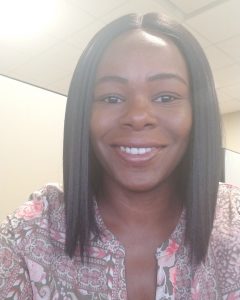 Katina works with Sheriffs’ Offices to process information the state of Florida requires during claims, lost-time claims, denied claims and other important documentation. She is also responsible for the development, coordination, implementation and management of EDI-related developments for the Fund.

At FSRMF, Katina’s typical day consists of reviewing claims and reporting transactions to the state of Florida. She also serves an important role in keeping individuals informed of where they are in the sometimes-confusing claims process. “I let clients know what is actually going on with the claim,” she says. “I also assist the claims adjusters with their day-to-day activities.”

Katina’s favorite part of her role with the Fund is also her biggest and most important responsibility. “I really like running the EDI,” she says. “Prior to this position, I was on the customer service side of things. Coming over into the EDI world has been the best part of my career.”

Before joining FSRMF, Katina gained valuable experience working with the Division of Workers Compensation within the Department of Financial Services for 13 years, in which she served several roles. “With my past employer, I provided customer service for those who were injured,” she says.

In her current position with the Fund, Katina enjoys what she does and is glad she can make a difference in the lives of those who work in law enforcement.

“The Fund is very important because of the risk law enforcement officers take during their typical day serving those in the community,” Katina said. “It’s important for them to have their own insurance fund versus going to a third-party insurance carrier. It is much less of a financial burden – and one less thing for them to worry about.”

When Katina isn’t at work, she enjoys spending time with her family, especially her godson.

“My godson plays football for the Little League, and I love to travel to his games with the rest of his fan club,” Katina said. “In my free time, I love doing anything if it involves spending time with him.”

Katina also likes to go on new adventures, wherever the wind (or her family), will take her. One of her favorite memories is visiting Universal Studios with her family earlier this year.

We are grateful for the skills and talent Katina brings to the FSRMF team!